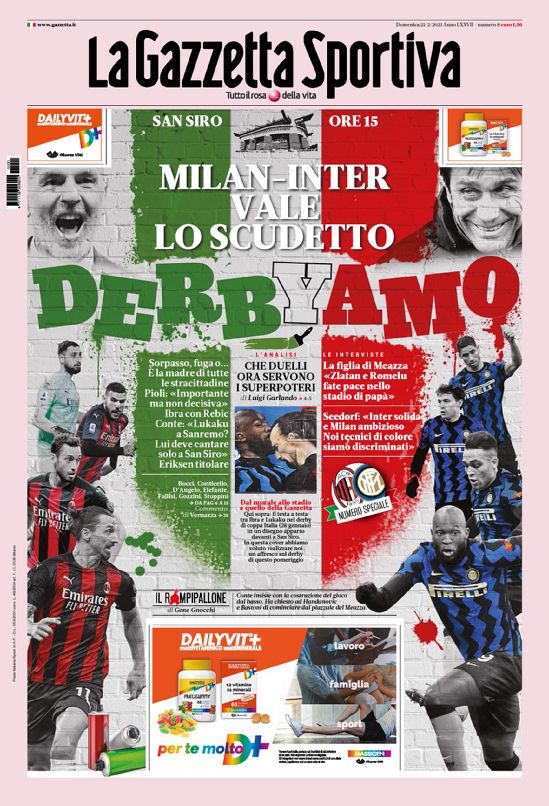 Derby della Madonnina, after 10 years teams from Milan are finally competitive.
I m Inter fan but this bet is without emotions but only on team that on the paper is better and should win.
Things start to look like should be in the table bcs Milan overcahieved with results in the League sincerely speaking. In many games they were the second best but took points in the last minutes of the games or bcs they got many penalties(13) some dubious ...Coach Pioli isnt a top coach but with Ibrahimovic in team raised Milan...You can love or hate Ibra but can't deny that he made impact with his arriving and with his mentality on the younger teammates. Also I didnt love some post match interviews of Pioli wwhere he only last week said how Spezia deservedly won and they were outplayed by them but I remember Lille,Juventus,Atalanta even in the first match btw these foes when Inter lost (1-2), even if they took point wouldnt be undeserved bcs in the second half Milan were in their half and Inter had many clear cut chances. According to the reports Rebic is favourite to start instead of Leao and Mandzukic & Bennacer are out with injury .
Milan

(4-2-3-1): Donnarumma; Calabria, Kjaer, Romagnoli, Theo Hernandez; Kessie, Tonali; Saelemaekers, Calhanoglu, Rebic; Ibrahimovic.
I still dont like Conte and his football but if he wins scudetto then I will be quiet otherwise should resign if he doesnt. Finally put Eriksen in the first team but in some new invented position as a pivot in the midfield where Brozo also play close to him in that role. In the past Conte said that Eriksen couldnt play deeper in the midfield but changed his stance finally...His formation will be 3-5-2 as we know and Perisic will play as a left wing instead of Young bcs his dear coach liked what saw from him in the last match with Lazio(3-1). Honestly I didnt like that showing where Inter played in their half all game and on counter...Lazio had 60%+ possession of the ball and couple good chances...but in Italy when you win you are the best but If they lost newspaper would put something like small Inter(piccola)... bcs I read Italian sports press and know how they function.
Inter