For me, the Everton win is not clear. Last year, Burnley also got the better of Everton. Of course, since then, Benitez has been in charge, not Ancelotti. The start of the season has gone well, Everton have played strongly and well in the first rounds.
Let's look at the numbers:
1. pictures, last game: 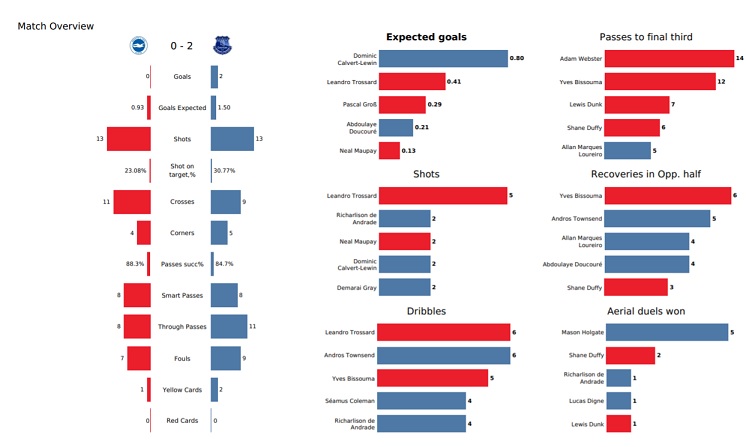 With Benitez, Everton are playing a completely different game, so far it shows in the numbers. Everton have scored over 1.5Xg in each of their league games.
I also looked at the Burnley data. It's not the play shown, it's the submissions. Surprisingly, Burnley can also create high quality situations, but lack effective finishing. Apart from Dwight McNeil, there are not many creative, technical players in the team. The acquisition of Maxwel Cornet might help Burnley's attacking problems.
Expected starters:
Everton: Pickford, Coleman, Mina, Keane, Digne, Townsend, Allan, Doucoure, Gray, Calvert-Lewin, Richarlison
Burnley: Pope; Lowton, Tarkowski, Mee, Taylor; Gudmundsson, Brownhill, Westwood, McNeil; Barnes, Wood.
I expect a tough game, I think Burnley will turn an opportunity into a goal.
Published: 13-09-2021, 19:19 CET Pick: Yes
Odds: 2.1 at Pinnacle