Fortaleza EC (Brazil) - Palmeiras:
Fourth game with Mano Menezes at the head of de Pallmeiras.
Coach already has much of the Palmieras season in hand.
Tonight match against Fortaleza could be decisive in the fight for the title, Flamengo is chasing after only three points away, leading with 42 points.
After a week to prepare for this meeting, Mano Menezes will have a different training for the fourth time due to suspension of Dudu (Attacker 18/5).
The impact Mano Menezes begins to see in Verdào, as he has 100% success in the club, this evening will field his fourth different formation.
Either because of disqualifications or
injuries, Mano Menezes since September 5 since he was driving Palmeiras, the coach has never managed to field the best Palmeiras, despite this he has won them all and is continuing to fight for the title.
Dudu disqualified due to the third yellow card will be the only one absent for Palmeiras but the choices are not lacking, the offensive midfielder Ze Rafael and striker Carlos Eduardo are in the running for a starting spot.
The eleven of Mano Menezes:
Weverton; Marcos Rocha, Gustavo Gomez (Luan), Victor Hugo and Diogo Barbosa; Felipe Melo, Bruno Henrique and Gustavo Scarpa; Zé Rafael, Willian and Luiz Adriano.
On the other hand, Fortaleza has the task of maintaining the category, which is quiet at the moment, placed in 14th place with 22 points, with four points ahead of Cruzeiro.
The coach of Fortaleza Ze Ricardo will have some absences problems to face Palmeiras, Felipe Pires (Attacker 7/1) and Wellinghton Paulista (Attacker 15/5), despite having resumed training, there will be no, they are two important absences in the department offensive.
With two absences, Ze Ricardo has the following formation:
Felipe Alves; Tinga, Quintero, Jackson and Carlinhos; Gabriel Dias, Felipe and Juninho; Romarinho, Osvaldo and André Luis. 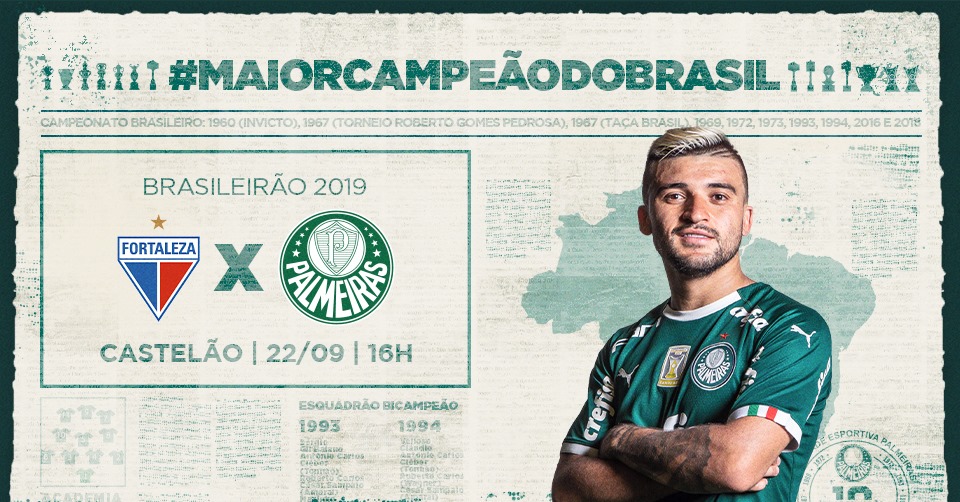 Final analysis:
Mano Menezes is looking for his fourth consecutive victory, but the three points are of extreme value, to continue chasing Flamengo, given that after the arrival of the coach Palmeiras is back in the race, he will win with almost all his best players, motivations for Palmeiras are too important, victory on the road of extreme prestige for Verdào, the change from Scolari has already been noticed, since the fans can still hope to win the title, not winning tonight would mean going to -6 from Flamengo, if the red-blacks would win on the field of Cruzeiro, I believe that here we will see the work of Mano Menezes, who is already playing most of his season, Palmeiras wins here.
Good luck.
Published: 21-09-2019, 16:18 CET Pick: Palmeiras -0.50 (AH)
Odds: 1.92 at Pinnacle