What times we are living in, odds like 2.14 for the reigning Turkish champion Galatasaray at home vs an average team as Antalya... Traditionally the price is around 1.30: 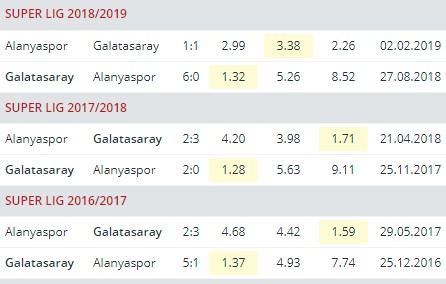 Sure Cimbom have problems this term, unimpressive results (not counting the loss by Tuzla few days ago, it was the reserves who got a chance), a number of mostly attacking pieces injured - Babel, Feghouli, Luyindama, Andone, Falcao. Still playing at home Galatasaray are not some midget team to be treated like that, Fatih Terim knows his job. It is even possible Falcao to appear in the 2nd half, according to the local press he is recovered after missing for 2 months and joined the group yesterday.
Antalya have to do without their best player and topscorer Papiss Cisse (12 starts, 9 goals), suspended for accumulation of yellow cards.
Published: 07-12-2019, 14:19 CET Pick: Galatasaray -0.5
Odds: 2.14 at Pinnacle