Right from the first round of Group D, we had a big showdown. Internazionale host multiple Champions League winners Real Madrid. Both teams have lost key players this summer due to the virus situation or other reasons. I expect a balanced match in terms of power, but also home goals. I think the home club have done very well with Inzaghi. They have managed to get one of the most talented coaches in Italy, who did well with Lazio in the Champions League last season.
The problem with Conte was that he is a very inflexible coach at international level. In general, Conte is a believer in 3-5-2, where individual creativity is very much curtailed. Inter, under Conte, suffered a lot in the Champions League. He played a static game and the opponents could easily turn it to their advantage. Inzaghi has a completely different credo.  Calcio Analyst's András Dániel Kéri, wrote: "Lazio optimally gains territory thanks to constant shifts of position and the manager deliberately rotates his own players in certain areas of the pitch based on a lack of awareness (see, among others, the personalised, centralised tactical roles of Stefan Radu and Senad Lulic). When defending, he is extremely clever and calculating in his interpretation of the situation, either holding his defensive lines deep or high, occupying central areas, blocking passing lanes and waiting, or deliberately using two or three attackers and an inside midfielder to recover the ball in the middle of the opponent's area. His 3-5-2, 3-4-3, 3-5-1-1 formation at Lazio over the years gives him the coverage he needs, while his football is more flexible and creative than Conte's in a similar formation." Inzaghi has started well with Inter, a smart signing was Dzeko, who does not have the same advantages as Lukaku, but could replace the striker who left for Chelsea in the short term. Today I expect a dangerous and tactically flexible Inter.
Turning to Real Madrid. The loss of Varane and Ramos has affected the team's defence. Ancelotti has his work cut out here, as the team has been scoring goals regularly in the league. The veteran Italian coach is also still in the early stages of his job, so this Real Madrid side is still plenty vulnerable.
Match information: 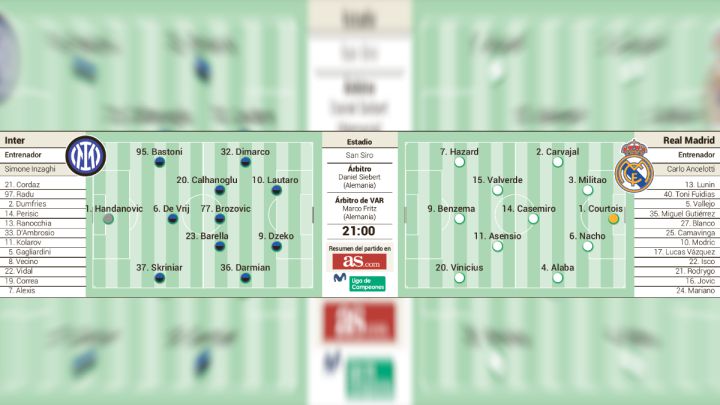 Inter: Handanovic; Skriniar, De Vrij, Bastoni; Darmian, Barella, Brozovic, Calhanoglu, Perisic; Dzeko, Lautaro.
Real Madrid will be missing. Ferland Mendy, Marcelo, Toni Kroos, Dani Ceballos and Gareth Bale did not travel with the team. Modric will be rested by Ancelotti.
Real Madrid: Courtois; Carvajal, Militao, Nacho, Alaba; Valverde, Casemiro, Asensio; Hazard, Benzema and Vinicius.
First round, there were some surprises yesterday, but today Inter start from a better position. Hazard's form is still not up to scratch, the team's defence is not up to scratch either. Based on what I've seen and what I've been told, I see great value in Inter's goals.
Good luck!
Published: 15-09-2021, 17:33 CET Pick: 1.5 over Inter
Odds: 2 at bet365