Decent odds for KTP right now, Pinna opened at 1.55 for this line yesterday.
Checking the table says something: 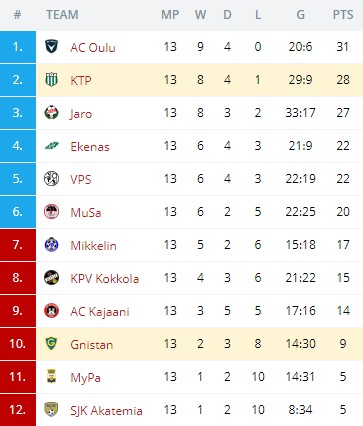 KTP are on fire lately. 6-2-0 since the start of August, the draws were against the other two hotshots Oulu (away) and Jaro. Last two games were won in a hammering manner, 6-0 and 4-0. It may have something to do with the recent foreign imports as Mika, Ogungbaro and Asier Arranz. Just Ollila is worth to mention missing for today's game.
Gnistan are obviously poor team, sometimes getting points but usually just a bag of balls in their net.
Couple of months ago KTP won away in Helsinki by 3-0.
Published: 16-09-2020, 12:17 CET Pick: KTP -1
Odds: 1.76 at Pinnacle