Let's pay some credit to Levante who pulled impressive results in the last month, lost just once in 8 games, beating both Atletico and Real in Madrid. The 2-0 win over los colchoneros was just few days ago placing them 2 pts over Athletic on table. And that was without the topscorer Roger Marti who missed the last 3 games but now recovered to start again.
Levante have lost just 2 from 12 games in Valencia, Athletic won twice from 11 tries away from San Mames.
Not to miss that both teams are also tied on the Copa del Rey semifinals, Levante got a morale boost taking 1-1 in Bilbao against the odds. The 2nd leg is on Thursday.
Copmared with the last liga round Levante lose Vezo for suspension, few others keep out while the good news as mentioned are the return of Roger. Athletic have Unai Lopez y Dani Garcia both suspended. 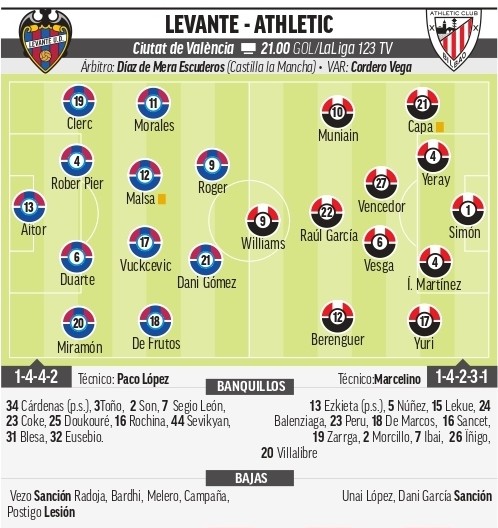