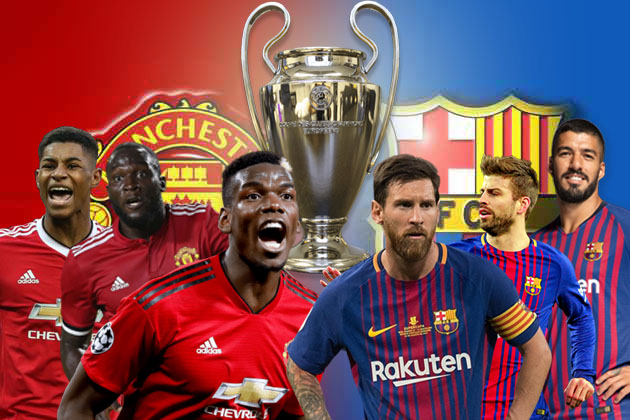 The odds for Barca are too good not to try them. Man U shocked everyone with their 3:1 win vs PSG, but they were very very lucky. In the 1st game at Old Traford were they've lost 0-2, I think we saw the true face of this team, who are overachieving big time for me. They have some world class players in attack - Rashford & Martial + Pogba & De Gea, but the rest is just average. Tonight, the midfield would be crucial and whoever wins that battle will have advantage. So Pogba, McTominay and Fred vs Vidal, Racitic and Busquets...well we all know how this would end. Also Man U should have someone to cover Messi personally but who -Hererra & Matic are out, so it would be either McTominay or Fred. I also expect Suarez tonight to have a very good game. Why ? - well the answer is: Suarez’s last Champions League away goal came in a 1-1 draw with Roma in September 2015. He's failed to score an away goal in the competition in 1,302 days or 1,508 minutes and this streak has to end at some point. Man U have lost 3 of their last 4 matches, winning only against Watford at home 2-1. Barca are too good for them and this should be another 'reality check' for Ole and his players. Messi & Suarez on the score-sheet. Pick: Barcelona to Win


Bettr 10-04-2019, 13:06
I can`t believe Barca are still at evens. I have them at around 1.80 at best. If Barca win, the bookies will be paying out a fortune.
AquiverBG 10-04-2019, 13:33
I agree...the odds are ridiculously high for Barca and with all that problems in Man U team, they`ll struggle a lot tonight
Bettr 10-04-2019, 13:36
Man City were around 1.80 pre-match and there`s no chance they were more likely to beat Tottenham than Barcelona beat Man Utd.
FollowMe 10-04-2019, 13:49
This match smells. I am an United fan, I will not bet but watch. Everybody will throw money on Barca and Spanish teams in England are not the best. This CL EVERYTHING is possible and we saw it against PSG. United is playing CL with first priority and it can be a draw or even a home win. The odds for Barcelona aren’t valuable for me at this stage of the CL.
mstreet 10-04-2019, 13:58
Barca does not play well in away matches when eliminations come, also Man U might have learned the lesson from the first PSG game. Odds for Barca win are good, but Man C odds were nice as well. Actually the value is on Man U win.
AquiverBG 10-04-2019, 14:03
I agree that the match is suspicious and bet on Barca is obvious, but at the same time I think both Messi & Suarez will score tonight and I just can`t see United scoring more than 1 goals vs Barcelona
AquiverBG 10-04-2019, 14:05
Lionel Messi has failed to score in any of his last 11 Champions League quarter-final appearances for Barcelona; since netting against PSG in April 2013, the Argentinian forward has attempted 49 shots without success at this stage of the competition.
AquiverBG 10-04-2019, 14:09
You have to go back to the round-of-16 match against Arsenal in 2016 for the last time La Blaugrana won a European knockout game on the road.Indeed, Barca have only scored one goal in the six such matches since then too.The Spanish giants have lost their last three away quarter-final legs without scoring a single goal, but they have already won in England this season courtesy of their 4-2 triumph over Tottenham Hotspur in the group stages.