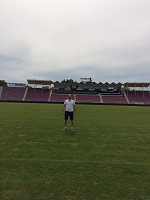 Back The Draw project 20% ROI

Sheriff Tiraspol was the favorite team in the first leg but lost surprisingly 0-3 at home against this Georgian team. Maybe the 3 goals difference is to harsh, but Saburtalo deserved the win.
Even if they lost the first match and now they travel to Tbilisi to turn around a 0-3 score, I think that Sheriff Tiraspol can win this one. The experience and the quality is in their favor. Maybe they had a bad day last week and treated their opponent with superiority.
It's useless to talk about their attacking / defensive statistics from the intern competition because this doesn't apply in international meetings. Experience, tactics and form are more relevant and at least two of them are in Sheriff Tiraspol's favor.
The Moldavian team will be better prepared tactical and will have to attack from the first minute.
I don't need them to qualify, I just want them to win this match.
I'm sure that the odds will drop the next days and that's the reason I posted this pick today.
Published: 14-07-2019, 13:12 CET Pick: Sheriff Tiraspol
Odds: 2.65 at bwin