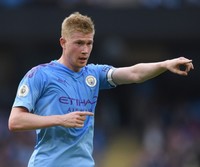 Swansea iority is clear. Promotion. They are amazing in the Championship recently beating Norwich - leader.
All the media hype and some fans want to put 'revenge' word into Swansea manager mouth for what happened two years ago but this is not the same team, Steve Cooper was not there then and it is not about revenge - believe me.
It is not Swanse manager's problem to take revenge for 2019.
City have a go in four competition and today with opponent focused on promotion, even direct one, Cup is not a priority for Swansea.
Sorry fans and media. Swansea go out of the cup today. Even if they will fight City team is waaaay better and wider and they want to win the cup
Swansea - Manchester City 0-3
Published: 10-02-2021, 10:32 CET Pick: Man City -1,5
Odds: 1.65 at Unibet