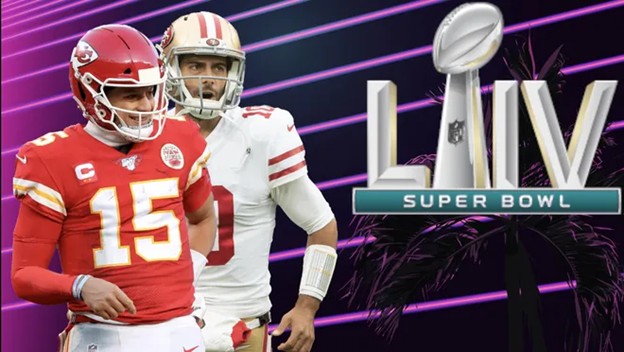 The Super Bowl is the single most-watched American television broadcast of the year and is projected to land nearly 100 million viewers in this upcoming matchup between the Chiefs and the 49ers. The 2014 Super Bowl between the New England Patriots and Seattle Seahawks currently holds the record with over 114 million viewers.

In last year’s Super Bowl, Nevada sportsbooks hauled in $159 million worth of wagers but the amount of total illegal bets placed was estimated at over $4.6 billion. Even the Super Bowl rings are expensive with an estimated price tag of over $40,000 apiece.

The odds on this Super Bowl matchup sees the Kansas City Chiefs as 1 to 1 ½ point favorites over the San Francisco 49ers with a total of 54 as of this writing. If you believe that Patrick Mahomes can crack the code of the vaunted 49ers defense then you’ll probably be betting the Chiefs. Assuming that is the case it’s quite likely that San Francisco will score enough points against a susceptible KC defense to push this game over the posted total.

However, if you’re convinced that nothing can penetrate the stingy Niners’ defense, not even the offensive juggernaut from Kansas City, then you’re likely to bet San Francisco and the under. Regardless of your wager, make sure to check out the NFL odds at all of the best online sportsbooks.

We all know that the Super Bowl is the NFL’s grandest stage and with that comes the legendary prop bets offered at virtually every online and Vegas sportsbook. Anything is in play from the length of time it will take for the singing of the National Anthem to heads or tails on the coin flip to begin the game, and even what color Gatorade will be poured over the head of the winning coach. Let’s take a look at a few of them right now.

Demi Lovato will do the honors and in her last rendition of the National Anthem she belted out the Star-Spangled Banner in 2:11 before the Conor McGregor/Floyd Mayweather fight in 2018. The oddsmakers at Bovada have set this line at an even two minutes but if you want to make a wager on it going longer than a deuce then you will have to put up $190 to make $100 but if you believe the soulful chanteuse will keep it short then you can wager $100 to win $145.

Speaking of impossibly hot female singers, there is little doubt that the halftime acts, Jennifer Lopez and Shakira will join forces at some point, to create a powerful duet. The prop bet for your consideration is how many songs will they perform together? Personally, I feel that if they do perform together then there has to be more than one because if a Lopez song is chosen then a Shakira song must follow suit, or vice-versa. Divas never like to be outdone.

If you can’t wait to get your game on then to get down on the coin flip before a single play is even called. Heads or tails, pick one and now you’ve got action. Pro Tip: Tails has come out on top in five of the last six Super Bowls and owns a 28-25 lead all-time.

The above is a small sampling of the hundreds of prop bets available but where to wager is probably your most important decision because it’s one thing to sweat the game but not the payout. Cruise on over to Best Sportsbooks and you will see all the top-rated online sportsbooks like 5Dimes, Bookmaker, Bovada, BetOnline, Heritage, and Intertops to name a few. Make sure to get the best numbers on all your bets, large or small, and enjoy the game!

PREMIUM PICKS
Get more and win more!
Betrush Premium features some of our best tipsters and has delivered over 15,000 picks and steady profits since the start in 2011. We care about serious betting - no makeup, odds are advised exclusively with Pinnacle and the Asian market. Subscriptions are affordable for everyone, starting from just €9.90 per week and cover all picks and tipsters on the BP site
IN FOCUS
Find Out What Makes You a Better Gambler, 08-07
Why is Sports Taking Over the World of Betting?, 06-07
Tips Choosing Online Casino to Play Blackjack, 06-07
Beginners tips on how to bet on sports safely, 06-07
Casinos on the Mobile Phone are becoming a convenient..., 06-07
Top 3 Tips on how to win a slot game at all time, 06-07
FUN88 - The best review casino online in 2020, 26-06
1xBet with a new promotion for esports fans, 24-06
What to look out for when choosing new casino sites in 2020, 11-06
Odds in Sports Betting Sites in Tanzania – Common Types, 11-06
W88 - The Top Bookmakers in Asia and Vietnam, 04-06
Letou Casino - One Of The Most Reputable Online Casinos, 04-06
The Current Effects On The Online Gambling Industry, 04-06
How to Find a Good Online Casino — Tips & Tricks, 02-06
The future of free pokies market by Aristocrat Leisure, 29-05
Changes to Look out for in US Sports Betting in 2020, 27-05
Dream11 Is Helping Cricket Return With Tournaments In the..., 25-05
Playtech Buys the Italian Gambling Brand Snaitech, 25-05
The 1-3-2-6 Betting System, 19-05
Top 3 online bookmakers in Las Vegas, 17-05
See more +